Sept. 15 was the date for the Legislative District 9 candidate debate hosted by the Citizens Clean Elections Commission (CCEC) and moderated by Hank Stephensen, LD9 resident and editor of the Captiol Times Yellow Sheet.

Due to the pandemic, the 2020 CCEC debates are being held online and not in person, as is the tradition. While we were waiting in the “green room” for the event to start, CCEC Executive Director Tom Collins said that the online debates have had much larger viewership than the in-person events, which is great news.

Below are the video time stamps for different questions, if you are interested in specific topics. Stephensen allows for more candidate interaction; check out the robust debates on unemployment insurance and how to pay for education.

END_OF_DOCUMENT_TOKEN_TO_BE_REPLACED

Last week, the Arizona Daily Star conducted their endorsement interview with the three Legislative District 9 candidates: Democratic incumbent Reps. Randy Friese and Pamela Powers Hannley and Republican challenger Brendan Lyons. In the before times, these interviews were conducted behind closed doors with only Star personnel and candidates at the newspaper’s office. In the COVID19 era, the endorsement interview was an online forum with ~15 constituents and Star staff in the audience. Having even a handful of constituents “in the room, was a worthwhile addition. As you’ll see in the video, the people had good questions about reproductive choice, education funding and other topics.

The interview is an hour long. Pop some popcorn, pour your favorite beverage, and watch the video here. For your convenience, below are the question time stamps. (You can check out my other endorsements, honors and candidate statements here. Watch the whole collection of Star endorsement interviews here.)

END_OF_DOCUMENT_TOKEN_TO_BE_REPLACED 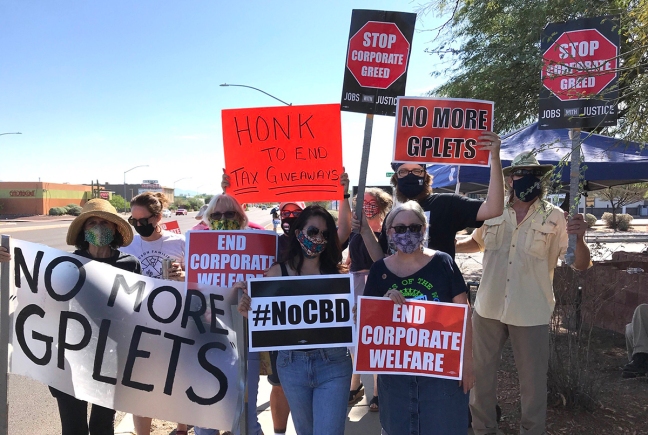 Instead of hosting a giant picnic at Reid Park with games, food, and networking, the Pima Area Labor Federation (PALF) joined other groups for seven days of protests against corporate tax giveaways, gentrification, and expansion of Tucson’s Central Business District this Labor Day week.

Barrio Neighborhood Coalition activists, PALF members, Mi Familia Vota, Jobs with Justice, college students, neighbors, Catholic workers, and other progressives turned out to protest the upcoming Tucson Mayor and Council decision on Sept. 9 regarding expansion of the Central Business District (CBD) and expansion of GPLET tax giveaways in the CBD.

The first protest was at the Ward 3 office in LD9. This office is located in the Opportunity Zone that conveniently runs along the path of destruction of the Grant Road Widening Project, which has been hanging in limbo for ~30 years just like the Broadway Blvd. Widening Project. In the days of increased online commuting, why are we knocking down all of the businesses on two major arteries, forcing businesses to move or close, and then incentivizing new businesses to go there? This is the ultimate in “picking winners and losers.” How is this friendly to local businesses when government forces many of them to go out of business or forces them to hang in limbo for decades while decisions are made in endless meetings, many of which are behind closed doors?

The Labor Day protest was at the Ward 6 office also in Midtown but in LD10. Approximately, 40 people came to that protest, including former City Councilwoman and former mayoral candidate Molly McKasson.  She lost the mayoral race to Republican and former Raytheon executive Bob Walkup. Years ago in the Arizona Daily Star, Molly said, “It’s too bad Tucson decided to put all of its eggs in the developers’ basket.” Ten years or more later, that statement is prophetic.

END_OF_DOCUMENT_TOKEN_TO_BE_REPLACED

Five years ago this month, I started my first campaign to run for the Arizona House to represent Legislative District 9.*

In 2016, I ran an unabashedly progressive Clean Elections campaign based upon economic reform, equity, and public health.

I advocated raising the minimum wage, tackling income inequality, ratification of the Equal Rights Amendment, and fighting discrimination against women and other minority groups.

Lastly, I was the only person back in 2015 talking about refocusing funds from the War of Drugs to tackle the opioid epidemic and  to end criminalization of marijuana. Far too many people — mostly men of color — are warehoused in Arizona prisons because of activist county prosecuters and over-policing of marijuana possession.

I promised to be the voice of the people in the Arizona Legislature, and as a Clean Elections candidate, I have been free to speak my mind because I am not dependent upon big money donations.

Now more than ever, with the COVID19 virus creating financial and public health insecurity, Arizona needs experienced leaders who will fight for the people and not kowtow to the corporations.

The Coronavirus has revealed deep-seated inequities and widespread race, sex, and gender discrimination in our systems. Underfunded public schools, mass incarceration, voter suppression, food and housing insecurity, environmental degradation in the name of profit, healthcare deserts, medical bankruptcy, and violence against innocents– whether it be domestic violence, gun violence, domestic terrorism, or police violence — these broken systems are baked into our laws.

It’s time for historic change in the Arizona Legislature and in Washington, DC in Nov. 2020.

It’s time to end austerity for the people and welfare for the corporations.

Giving away billions of taxpayer dollars annually was already an unsustainable path. Continuing Arizona’s carte blanche corporate and special interest tax giveaways during the COVID19 era and beyond is fiscally irresponsible. We will need funds to rebuild our state; the tax breaks have got to stop. We can’t afford them.

Arizona should be investing in future generations. We should fund the People’s To-Do List: education, roads, healthcare,
and security — not the corporate wish of tax giveaways, deregulation, privatization, and sweetheart deals.

END_OF_DOCUMENT_TOKEN_TO_BE_REPLACED

Thank you so much, LD9 voters, for making me the top vote-getter in the August 4 Primary Election, with 29,713 votes (50.7%).* Even though the LD9 House Democrats — Dr. Randy Friese and me — didn’t have a primary challenger, LD9 voters turned out the vote and heavily supported both incumbents over the General Election challenger. In November 6, 2018 election, Friese ended the night a few hundred votes ahead of me (less than 1%). This August, I’m a few hundred votes ahead of him … a statistical dead heat in both elections. Thanks for supporting both of us. I think we make a good team.  Let’s do this again on November 3, 2020, LD9.

Another pleasant outcome on Tuesday was the substantial showing that both Friese and I made, compared to our Chamber-backed Republican challenger Brendan Lyons. I am currently beating Lyons by 11,608 and Friese by 822, as final votes are counted. Below is the full screen shot from the Secretary of State’s website as of today (August 11). Lyons has hired a large, out-of-state consulting firm to run his campaign to oust me from the Arizona House. In 2018, I beat my Democratic challenger by >14,000 votes and beat my Republican challenger by almost 13,000 votes. Bring it on.

END_OF_DOCUMENT_TOKEN_TO_BE_REPLACED

Corporate America, was it something I said?

Are you putting tens of thousands of dollars in big money donations behind my pro Trump, pro deregulation, pro tax giveaway, pro privatized insurance, pro Open Up Arizona (and masks are a personal choice) Republican opponent because I told the people of Arizona the truth about tax giveaways? That we were poised to giveaway $1 billion in taxes to corporations, special interest groups and wealthy Arizonans in 2020, after giving them $400 million in 2019?

Or was it because I said (repeatedly) that we should fund the People’s To-Do List — Education, Infrastructure, Healthcare and Safety and Security — instead of the Corporate Wish List?

Or maybe you didn’t like my video on raising taxes on the wealthy to pay for public education, instead of continuing to raise sales taxes on the poor to fund the state government?

Or maybe you didn’t like it when I exposed the GPLET tax shell game or the $13 billion in state tax giveaways?

Or was it my speeches against voter suppression and against attacks on Clean Elections, the Citizen’s Initiative, Independent Redistricting and Medical Marijuana?

Or was it because I opposed the sub-minimum wage of $7.25/hour, fake pregnancy clinics, dangerous deregulation, and Reefer Madness anti-marijuana legalization efforts?

Or was it when I said that Arizona chose a short-term economic boost over common sense, opened up the economy too soon, and gave our state the worst COVID19 record in the world ?

END_OF_DOCUMENT_TOKEN_TO_BE_REPLACED 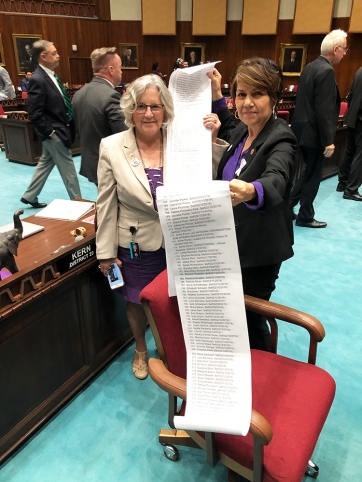 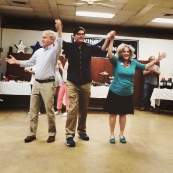 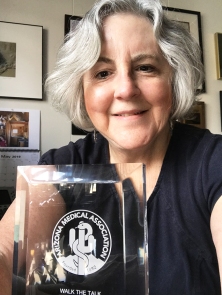 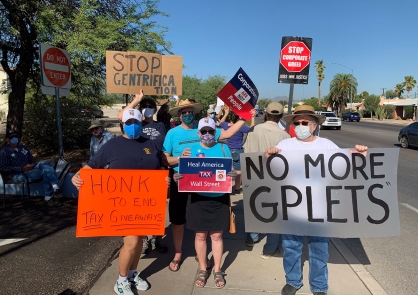 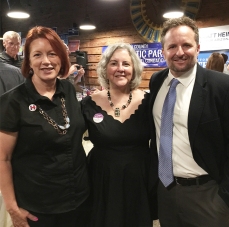 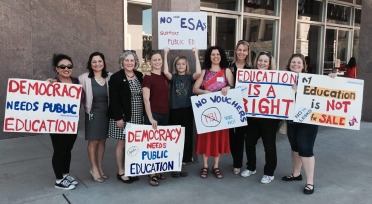 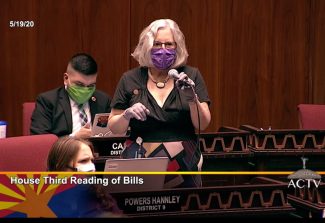